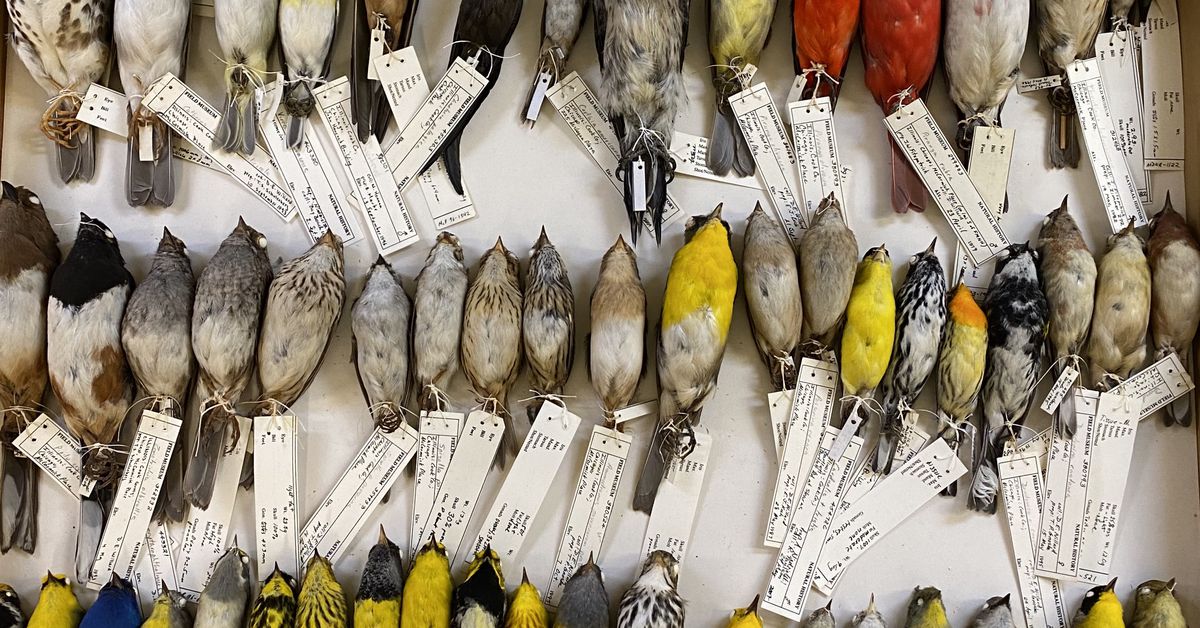 This story is part of Down to Earth, a Vox reporting initiative on the science, politics, and economics of the biodiversity crisis.

One fall morning in 1978, David Willard, an ornithologist at the Field Museum in Chicago, walked to the nearby McCormick Place convention center — a hulking structure along Lake Michigan — to look for dead birds. He’d received a tip that birds were crashing into the building’s many windows on their journey south.

Four decades later, Willard has helped collect more than 100,000 birds from window collisions in Chicago, with help from other scientists and volunteers. They now make up a stunning 20 percent of the museum’s ornithology collection.

While these birds represent a tragic loss of life, they’ve also helped reveal fascinating insights into how wildlife is changing. One especially striking finding from the collection is that these birds have been shrinking — and rising global temperatures are likely to blame, according to a 2019 analysis of Willard’s measurements.

It’s not just birds. A growing body of research suggests that global warming is messing with the body sizes of all kinds of creatures, from cold-blooded frogs to warm-bodied mammals, and often making animals smaller.

Wild animals are already facing a wide range of threats. If they shrink — and especially if they shrink at different rates, as researchers predict — that could push some species even closer to extinction. And it could throw a wrench into ecosystems that humans rely on.

The link between body size and temperature

We already know climate change will impact wildlife in a number of ways, from shifting the distribution of some species to altering the color of others. But it might be surprising to learn about changes in something as fundamental as body size.

In ecology, a principle called Bergmann’s rule suggests that individuals of a population of warm-blooded animals like birds or mammals will be larger in cooler climates and smaller in warmer ones. Intuitively, this makes sense: Larger individuals have an easier time conserving heat when it’s cold, and smaller animals have an easier time cooling off when it’s hot. This has to do with the ratio of an animal’s body size to its surface area. (It’s the same reason why a large ice cube melts relatively slower than a small one.)

The idea that warming is linked to smaller body sizes also bears out in fossil evidence. During the largest warming event in the early Eocene, about 56 million years ago — when temperatures increased between 5 to 8 degrees Celsius within 10,000 years — many animals got smaller, including mammals (which scientists learned by measuring fossilized teeth). Another past warming event called the Eocene Thermal Maximum 2, which saw temperatures increase by 3°C, was also associated with shrinking animals.

Scientists look to these warming periods to understand what the future might look like. If current warming continues, we can expect the planet to be 1.5°C warmer by 2040, compared to pre-industrial levels. And it will go up from there. “Reductions in body size in fossils,” two ecologists wrote in a 2011 perspective for Nature Climate Change, “are particularly informative of what we can expect in the coming century.”

Then again, nature is complicated and tends to surprise even the brightest minds.

Many animals are getting smaller, but it’s not a universal trend

In 2019, when scientists examined more than 70,000 bird specimens in the Field Museum collection, they found that individuals from 52 bird species shrank by an average of 2.6 percent between 1978 and 2016. A part of the birds’ legs, known as the tarsus, also got smaller, on average.

“We had no idea until two years ago that 52 of the most common, well-known species of North American bird have all gotten smaller over the last 40 years,” said Brian Weeks, the lead author of the study and an assistant professor of ecology and evolution at the University of Michigan. “It has big implications for what’s going to happen in the future.”

Other studies on birds, deer, rodents, insects, and fish show similar patterns. Research in 2017, for example, found that the body size of a small, silver fish called menhaden, which is widely used for animal feed and bait, has shrunk on average by 15 percent over the last 65 years — most likely due to warming. “As the Earth’s atmosphere and oceans continue to warm, the future of menhaden, it seems, will be even smaller,” said R. Eugene Turner, the author of the study and a professor at Louisiana State University.

What’s interesting is that fish and other so-called ectotherms don’t generate their own heat, so having a smaller body doesn’t help them stay cool. Instead, they might shrink in response to warming for other reasons, said Jennifer Sheridan, assistant curator for amphibians and reptiles at Carnegie Museum of Natural History and the lead author of the 2011 perspective. Warm temperatures, for example, speed up the development phases of frogs, from egg to tadpole and so on, but their rate of growth doesn’t keep up, she said. As a result, they’re smaller by the time they arrive at adulthood.

But while there are plenty of examples that fit this trend, there are also many exceptions — and a whole lot we still don’t know.

If Bergmann’s rule were truly universal, you’d expect individuals of a species’ population to be smaller in warmer parts of their range — smaller polar bears further south, say. But a 2017 analysis of more than 950 species of birds and mammals found that “most species had similar sizes regardless of the temperature of their environment.”

There’s even evidence that certain animals are getting larger, Sheridan said. It’s not totally clear how that happens, but one explanation is that warming holds back winter and extends the growing season, allowing animals that eat plants to bulk up. (Sheridan also said that museums with specimen collections are more commonly found in temperate, wealthier regions, which can create gaps in the data.)

The point is that natural systems are really complicated. Even if theory and lab research suggests that animals consistently shrink under warming, the exact result of climate change is messier in reality, she said. “It’s almost always the case that some are getting smaller and some are not,” Sheridan said. “With climate change, there are so many other factors changing at the same time.”

There are also unanswered questions about how, exactly, animals are shrinking. The big one is whether body-size changes result from natural selection — meaning, they’re passed down from one generation to the next — or occur within the lifetime of a single animal, which researchers call “plastic” changes.

What happens when animals miniaturize

These details aside, researchers are confident that global warming will mess with the size of animals and make many of them smaller. But is that a problem?

You could argue that Earth has been here before. It’s gone through major periods of warming, and many animals were able to adapt to drastic changes — birds, after all, evolved from dinosaurs millions of years ago, and there are some 10,000 to 18,000 species of them today. But then again, today is nothing like the Eocene. We’re warming the planet at an unprecedented rate — about 10 times faster than the average warming following historic ice ages — which means most animals have little time to adapt. “The idea that they’re going to happily evolve is an oversimplification,” Weeks said.

And to be clear: Shrinking comes at a cost. For many species, a smaller size translates to fewer babies, said Sheridan. “The fact that they’re smaller has implications for their future reproduction, which, in turn, has implications for population size,” she said. “This is one of the reasons why people care so much about body size.”

For some ectotherms, including amphibians, being small also makes you more likely to dry out during a drought. Body size has implications for species that have evolved specialized body types for long migrations. (Interestingly, the 2019 study on migratory birds found that their wings are actually getting longer, likely to compensate for their smaller body size, Weeks said.)

But perhaps more concerning is that warming will change body sizes in different ways for different species, said Sheridan, and that can screw up the relationships between animals. For example, if a predator shrinks more slowly than its prey, it might need more prey to fill its stomach in a warming world.

“If everything was getting smaller at the same rate, I don’t think it would be that big of a deal,” Sheridan said. There would still be consequences, she said, such as higher extinction risks for some species, but you would likely just have “a miniaturized ecosystem that is still functioning because all of the elements are still in proportion to one another.” It’s the mismatch, she said, that’s “extra worrisome.”

Debates about the role of warming in shrinking animals are ongoing. Sheridan, for one, is working on an update of her 2011 article that will include more data, and it includes more exceptions to the rule. And Weeks is working to understand, among other things, whether the changes in body size he observed in birds were produced through evolution or during their lives: “If you warm up birds while they’re developing, do they actually get smaller?”

Meanwhile, David Willard, now collections manager emeritus at the Field Museum, is still spending some of his time looking for birds. Lately, there haven’t been many to collect, he said, because the bright lights at the convention center that can attract and disorient birds have been off for much of the pandemic. That’s one bit of good news that has come out of his research: It’s possible to save the lives of birds just by turning off the lights.